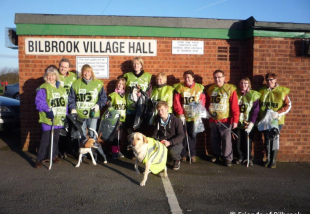 One of the key aims of the Climate UK network is to provide responses to climate impacts that reflect local circumstances, local risks and local opportunities.  One of the most effective ways of achieving this ambition is to help bring together local people to improve the resilience of their community to severe weather impacts.  In times of financial austerity, communities at greatest risk from the elements may not always have the help and support that they need to adequately tackle impacts such as flooding of properties, snow-clogged roads or swelteringly hot homes.

So it is fundamental that mechanisms are put in place to help communities help themselves, by working together to protect the most at-risk people in their area. This does not let responding authorities off the hook, as they still play a key role in providing community support.  But communities with their own responsibilities can get things done at the right time for them.

An example of where this philosophy is being applied is in the village of Bilbrook, located in rural Staffordshire.  The village has been strong at dealing with issues including flooding, fuel poverty, land degradation and rural isolation, but it is little wonder that parish councillors and community groups in the village were keen to do more, to minimise the risk to their residents and improve quality of life.  Staffordshire County Council and South Staffordshire Council ran a workshop with the local councillors, community groups, such as Friends of Bilbrook, and other interested authorities, such as the local fireman, to identify what the biggest issues are for them and their residents.  It also sought to identify, at grid reference level, where exactly these issues are occurring; where are the flood hotspots and who are the fuel poor residents?

The outputs of this workshop were fed into a Severe Weather Action Plan, which provides a mechanism for community members to take responsibility for their own issues.  You might think that a lack of resource or funding could render this impossible, but some of the actions are quick, simple and can be integrated into existing community work.  Examples include:

– Residents who contribute towards keeping green spaces litter-free and planting trees having extra responsibility to clean out clogged up gullies, to prevent surface flooding;

– Residents who are already part of the Good Neighbours scheme now go out and bring in shopping for those people who struggle to walk in icy conditions, and;

– The utilisation of the council’s free Ice Busters scheme that provides grit to the area allowing willing volunteers to treat roads and pavements of vulnerable locations.

The resilience of Bilbrook is now no longer in the hands of others; it is, at least in part, in their own hands.  They have the control and an enhanced ability to deal with what is thrown at them.

And what was one of the biggest successes of the scheme?  Instilling community empowerment and giving those people a connected purpose to help make their precious environment a more enjoyable place to live.

To find out more about the Bilbrook scheme, contact Alan Carr at .

As to London initiatives, the London Borough of Islington’s project on adapting to the health impacts of climate change set out a strategy for protecting vulnerable people from both heat and cold, as a research initiative with University College London (UCL) and local community groups. This initially involved temperature modelling work to identify which types of housing and were most vulnerable to heat and cold. The strategy then examined which residents were most vulnerable to these impacts, involving social research to identify how local residents perceived climate impacts. This helped to understand local perception of the problem, and also increased the teams’ understanding of the networks and teams who were in contact with vulnerable residents.

Finally, the URBAN HEAT: community-led resilience to urban heatwaves project aims to directly develop local resilience to heatwaves, particularly among the most vulnerable, and to examine the ways in which existing local social networks – for example, those relating to older people, disabled people, sustainability, faith, residents’ associations – can support this development. The project will consist of three case studies, all focusing on areas of London in which disadvantage is relatively high and sizeable ethnic minority populations are present: Dalston in Hackney, Tooting in Wandsworth and Ivybridge housing estate in Hounslow – the project’s overall goal is to bring community groups together with local institutions to plan together, and to further develop the concept of community-led resilience across the UK.