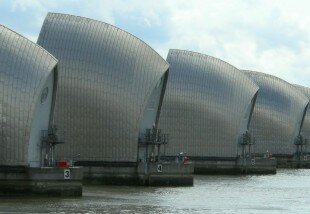 Sea levels are rising, but how much will they rise over the century, and how will that increase the risk to people and property? Will storm surges increase in size to further threaten vulnerable communities? And what does this mean to London, with the extensive Thames tidal floodplain running through its heart?

The Environment Agency has developed a plan which sets out how to continue to protect 1.25 million people and £200 billion worth of property in London and the Thames estuary from increasing tidal flood risk through to the end of the century, and beyond.

The plan takes into account increasing flood risk due to:

And it has developed an innovative approach to long-term climate adaptation planning, where the inherent uncertainties in the future risk can be managed.

Improving our knowledge of climate change

As climate change is a significant factor in determining the increasing flood risk, the Environment Agency funded major, new research to help reduce some of the uncertainty around assumptions on climate change impacts affecting the Estuary. The research looked at changes to fluvial flows and sea storm surges, and sea level rise due to thermal expansion and polar ice melt. In total, the modelling took up one year’s capacity of the Met Office supercomputer.

The findings meant that we revised down our worst case scenario for flooding on the Thames from +4.2 metres to 2.7 metres. They also show that it is likely that the Thames Barrier and associated defences have a greater life expectancy than first thought.

A plan for the future

The findings were used to inform the Thames Estuary 2100 (TE2100) Plan, which following a public consultation, was approved by Defra in November 2012. The TE2100 plan is available to view on our website.

The TE2100 plan is a flexible and adaptable solution to increasing flood risk in London and the Thames estuary. It avoids committing to flood defence infrastructure which may either prove unnecessary due to lower than predicted sea-level rise, or be made quickly redundant by accelerations in climate change impacts.

The innovative approach to ‘planning for uncertainty’ allows for flood risk management measures to be developed in a timely, sustainable and cost-effective way – whatever the future holds.

The TE2100 plan has driven much of the science behind the latest marine climate projections for London and the UK, and its approach has gained interest from around the world. The Plan has been used as best practice for adapting to an uncertain future and we have worked with many world cities such as New York, Rotterdam, Jakarta and others to pioneer new approaches to climate change adaptation.

However, even using current state-of-the-art techniques the uncertainty is still high and the worst case is the most uncertain. Because of this it is essential that we continue to monitor the rates of sea level rise and maintain links with developing science.

Want to find out more?

Science Museum Lates: A changing climate and Flood Risk in the Thames estuary
If you would like to hear more about the TE2100 project and the climate change science behind it, will be giving talks as part of Science Museum Lates, on Wednesday 24 April. His talk will focus on the challenge of planning for sea level rise in London and how the Thames Estuary 2100 plan is going to tackle it.