Communicating the Need for the ‘Greatest Collective Action in History’ 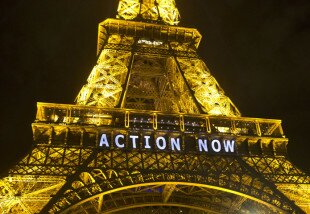 The COP21 agreement was a triumph of diplomacy and rationalism; science spoke ‘truth’ to ‘power’, and power responded. The agreement may prove to be a turning point in human history. But this will only be so if words are translated into actions.

Daunting challenges are entailed. To succeed requires the ‘Greatest Collective Action in History’ – the need to fundamentally and rapidly transform the world’s energy system, transport system, and possibly the economic system also. It will be necessary to adapt established infrastructure and behaviors to new climatic conditions already in the pipeline.

None of this will be achievable without public permissions and support. Here the climate science community has been less successful. Although within most nations there exists broad recognition that climate change is problem, the nature, scale and urgency of the required actions is not widely appreciated. Amongst an influential subset it is actively denied.

So what is the climate science community to do? Most scientists regard their research as their primary task, and their interaction with society as secondary. The academic rewards system still tends to reinforce this view. As a result, the skills and experience within the community for effective public discourse are limited to a vanguard of individuals operating without coordination, with sparse training in the fundamentals of dialectic, and little knowledge of the psychological principles involved.

Those scientists who do engage, tend to persist in delivering evidence in the ‘information deficit mode’, which is known to be of limited effect with non-expert audiences. The use of narrative, personal story telling and the delivery of expert opinion is rare. There is a pressing need for a reassessment of priorities, and a major effort to encourage, train and support climate scientists to enter the rough and tumble of the public square, savvy and well-equipped.

Just as the ‘Mission Innovation’ initiative, backed by twenty nations, seeks to catalyse the massive development and deployment of ‘green’ technology, a parallel ‘Mission Conversation’ needs to stimulate new levels of public discourse to enable citizens to make well-informed decisions about the policies and actions they will support and tolerate.

The community needs to learn how best to “attract, engage, entertain, inform – and leave people to make up their own minds”. With the ability rapidly diminishing of holding temperatures to the COP21 goal of “well below 2 degrees C relative to preindustrial”, they need to do so quickly.

‘2071 – The World We’ll Leave Our Grandchildren’ by and is published in paperback by , priced £8.99, and is also available as an eBook