Reducing emissions and preparing for climate change: a roadmap for the new Government

The Committee on Climate Change (CCC) has produced its first report to the new parliament regarding reducing emissions and preparing for climate change.

For the first time, the CCC combined its reports on climate change mitigation and adaptation, highlighting five key recommendations for action:

1. Ensure the power sector can invest with a 10-year lead time;
2. Develop plans and policies that deliver low-carbon heat and energy efficiency, whilst also addressing the increasing risk of heat stress and flooding;
3. Maintain transport for the up-front costs of electric vehicles;
4. Make decisions that help reduce emissions and improve the resilience of infrastructure networks and services during periods of extreme weather; and
5. Preserve and enhance the country’s natural capital.

It was strongly highlighted by all the event’s speakers that those actions were making economic sense – as Lord Deben said; “every month we allow to go by without action we increase the cost and we increase the damage of climate change”. He therefore called for setting out the economic mechanisms that will allow action delivery.

In regard to climate change adaptation, while action on flood risk and water scarcity was recognised as progressing (though more is needed to be done), overheating and natural resource scarcity were highlighted as in urgent need to be tackled – see table below. 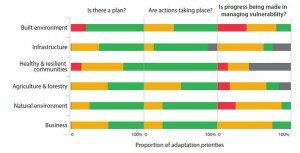 The National Adaptation Programe (NAP)’s actions have also been questioned at the event, in the light of the relatively small results those actions have been leading to – there was thus a call for the NAP to be more strategic with prioritized, measurable and time-constrained actions.

About the report, LCCP Chair  said:

It’s truly encouraging that in 2014 the UK’s carbon emissions decreased by 8% whilst the economy grew 2.8%. This sets the lie to the often posed false choice between the economy and the environment. The truth is that with savvy action, the path to a cleaner and more ethical world can also be a highly profitable one. The recommendations of the CCC point the way.

You can read more expert reaction to the Committee on Climate Change’s report here.

Also, following the Committee on Climate Change (CCC)’s 7th annual progress report on meeting carbon budgets publication on 15 July, Climate UK will be working with the CCC to bring those latest findings to a wider audience across the UK through a Reporting on Climate Change 2015 event series.